Your daily dose of innovation 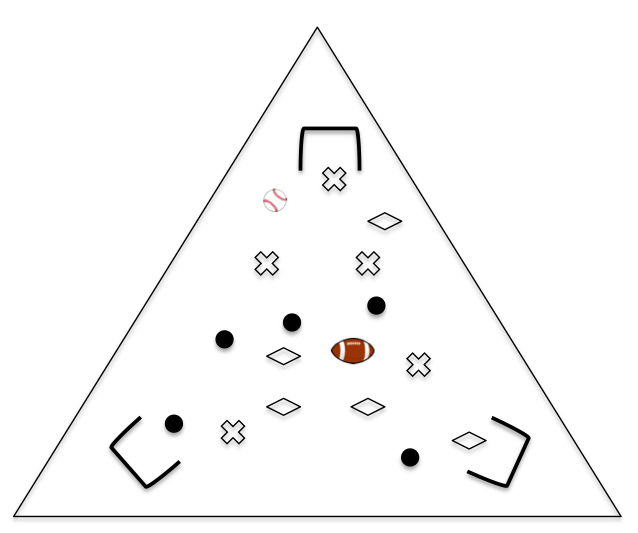 Imagine a typical ball game … goals of some sort, two teams, a ball, relatively clear rules … all the players are generally competent in the game’s usual strategy … the whistle blows and the sporting event unfolds over time in much the way we expect, with some variation in how the end is reached.

While a sometimes entertaining retreat from a normal day, sports tend to eventually replicate our often mundane lives: interesting at first, and then tiresome. Yes, soccer has won the world over and is a tried and true spectator phenomenon, but what if we added a third goal in the middle of a game? Or another team?  Or both?  And what if we added another ball? Of different dimensions? And maybe even a different shape?

Yes, chaos would surely ensue and new rules would need to be adapted.  Teams would reconvene in the huddle, (brains charged up with frustrated but creative energy), to re-assess their strengths and weaknesses, discuss new strategies, and identify different opportunities and gaps within a ‘broken’ system. Eventually, a new sport emerges and in ten years, it too has won the world over.

I introduce a game of Crazy Ball (don’t ask me for the rules, they change every year and sometimes right before the game depending on my mood), into my Creative Leadership course to demonstrate the power of stirring up the status quo and re-examining the paradigms in which we live.

Why do we just assume that a ball game has two teams and one ball? Why don’t we invent new sports every couple of years? What pattern in our lives, what set way of seeing the world, has kept us from new opportunities and a paradigm-shifting way of living? Sure, the initial change will come as a shock to our system, ambiguity always causes discomfort. But when the vision strikes for an innovation that leads to a better existence, grab the crazy ball and your new strategy, and run towards the goal at a sprint.

Still unsure? Think of Social Media Communication, Smart Phones, Recycling, Civil Rights … if the change is better, eventually, everyone will be on the field with you.